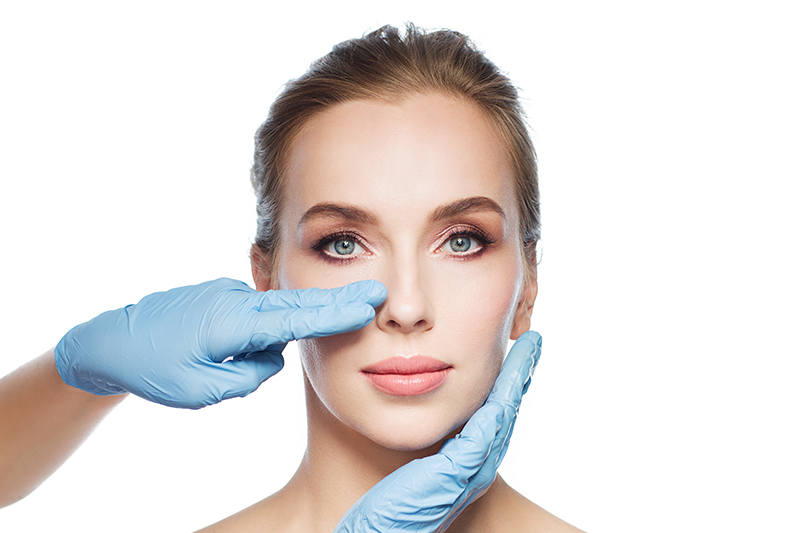 Aesthetic surgery of the nose is the most frequently performed procedure worldwide. Since it is located in the middle of the face, it is the organ that has the greatest influence on both your facial expression and your natural beauty. Therefore, a well performed nose operation is very important for both health and aesthetic reasons. The aim of a nose operation is to make a nose that matches your profile. According to the person's preference, the tip of the nose, the bridge of the nose, the root of the nose or the nostrils can be reshaped. Problems with breathing can also be corrected.

The nose operation should be planned in a personalized way. It would be wrong to want to make the same nose for everyone. The face is a whole unity. Therefore, the most important consideration in a nose operation is to pay attention to both the natural appearance and the functionality of the nose.

Aesthetic nose surgery can change the shape of the bridge or the tip of the nose , can reduce or increase its size, can reduce the size of your nostrils or can adjust the distance between the bridge and forehead or the seats and lips. It can also help to treat respiratory problems such as polyps, sinusitis, nasal flesh and septal deviation.

Aesthetic nose surgery ( rhinoplasty ) is the most widespread aesthetic surgery.

The evaluation before your rhinoplasty

Before any aesthetic surgery, it should be noted that one of the most important factors is psychological readiness. The recommended minimum age is 16-17, when the nose has grown to 90%.

At the first consultation, the doctor will explain to you the details of the surgical technique, the anesthesia, where the operation will take place and what he can really achieve during the operation. Hundreds of successful rhinoplasties are performed annually.

Complications (infection, etc.) are rare during the first correction operation. Poor healing requires a second operation. If the doctor's advice is followed during the healing process, the risk of infection is low.

Aesthetic Rhinoplasty (Nose job) is performed to change the chape, reduce or enlarge the size of the nose, to reshape the tip, to remove bumps, to correct the angle between the upper lip and nose. In some cases, it is necessary to add tissue to correct the contour. One or all of these changes can be performed in a single operation.

The incisions in most nasal surgeries are made into the nasal wings and worked from there.

The incision allows the surgeon to cut, shave, reshape the bone and cartilage, and alter its appearance. The nasal bump is removed by the use of a chisel or saw-like instrument, and then the nasal bones on both sides are brought closer together to form a narrower bridge.

The cartilage reduction shrinks the tip of the nose and provides a better contour. The nose tip is removed to correct the angle between the nose root and the upper lip. This is done by shaving the cartilage in the middle of the nose through the incision made to the wings. If a large bump is removed, the base of the nose will be disproportionately wide. If small leather triangles are removed from the base, the nose wings get closer to the midline.

What are the different types of nose surgery (rhinoplasty)?

In closed rhinoplasty technique, all incisions are made inside the nose and there is no incision on the nose skin from the outside. The closed technique is mostly done to correct the tip of the nose kind of problems. Closed rhinoplasty is technically more difficult, requiring the surgeon to master the anatomical knowledge very well. In this technique, cartilages at the tip of the nose are less traumatized, edema and swelling passes more quickly, asymmetry is less common.

Is there an ideal age for aesthetic nose surgery?

Given that Rhinoplasty is about adjusting and refining the appearance of the nose, the best time to do it is early in life to have the maximum benefit.  Before doing rhinoplasty it’s important that you’ve reached full growth of your bones, which is typically around age 18.  Having said that, some people mature more quickly and it is possible to do rhinoplasty as young as age 16.

What are the preparations before the aesthetic nose surgery?

People who are preparing for an aesthetic nose surgery should agree with the doctor about the shape and technique at least 1 month before the procedure. Do not take aspirin, vitamins, homeopathic medication, energy drinks or green tea one month before the procedure. They have been proven to cause bruises and swelling. Nicotine and alcohol should also be avoided. On the day of surgery, the patient should have no cold, flu or lip herpes.

What is the procedure of aesthetic nose surgery?

The nose operation is performed under general anesthesia and lasts approx. 1.5-2 hours. After the operation no pain is felt. The patient stays one night and is discharged the next day.

How does the healing process proceed after the aesthetic nose operation?

After the operation, slight pain may be felt, which is treated with medication. It is recommended that the patient sleep on an elevated pillow and put ice on his eyes to avoid bruises and swelling.

The nasal cast is usually removed after one week, but it can take up to 10 days. Your surgeon may require you to wear the cast overnight. The nasal tampons must also be worn for a few days. The bruises around the eyes fade after a few days. The bruise's colors also disappear after 2-3 weeks. The swelling of the nose slowly disappears, sometimes lasting several months.

Since many aesthetic rhinoplasties are performed inside the nose, there are no visible scars. If wide wings of the nose are to be narrowed, small incisions are made at both arches, but these will hardly be visible later.

The patient does not have to reckon with having to go to the doctor again. The healing process can be quite long. It can take weeks, months and for some patients even up to a year to see the final results.

The result of the correction depends on the extent of the operation and the nature of your nose, cartilage and skin. The success of correcting a disfigured nose will be more visible than, for example, reducing a slightly large nose.

Your surgeon will also arrange a program for you to be able to return to your daily routine after 1-2 days. In order to avoid affecting the healing process, some activities that increase blood pressure, such as running, swimming or bending forward, should be avoided in the first few weeks after the operation. The ability to work depends on the patient's well-being and swelling.

After removing the nasal plaster, patient can go back to using make up products. After the operation, cosmetic products that require heavy rubbing should be avoided for several weeks.

Sun protection should also be applied until the bruises have disappeared.

Which factors have a positive impact on the results of an aesthetic nose operation?

Smooth wound healing for the patient

No previous operations at the desired locations

The skin on the nose should be thin.

The cartilage should be strong

The tip of the nose should be thin.

No disproportion between nose and face

After the operation, follow the doctor's advice and recommendations.

Which factors have a negative impact on the results of an aesthetic nose operation?

What are the advantages of open rhinoplasty?

The most important advantage is the exposed anatomy of the nose. This minimizes risks such as bone inequality or cartilage asymmetries or other complications.

The second advantage is that for people with both a thick nose tip and thick skin, whose cartilage is poorly constructed, almost a new nose can be created.

The third advantage is that it is easier to correct errors that occurred during the first procedure, such as bone inequalities, cartilage asymmetries, large noses and other deformities. The last advantage is to avoid deforming the tip of the nose by the cartilage.

When could we have corrective surgery?

Although it is difficult to guarantee the success of the operation, are there ways to achieve it?

The results of rhinoplasty will vary depending on the type of correction you want. Of course, it is important that you and your surgeon participate in the same goal. If your expectations are realistic and your surgeon is involved, you will probably get the results you want. The answer to why you need to have a rhinoplasty done is a process that concerns you in this sense.

The patient should always be reminded that with great patience, he or she can see the final result after about 6 to 12 months. In addition, it would be fair to photograph your nose from 6 different perspectives before the operation and throughout the healing process.

How long should I wear tampons, plaster and bandages?

Nasal swabs are removed on the second or third day. The cast on the bridge of the nose remains for 7-10 days. When the cast is removed, the possible shape of the nose is visible. However, it should not be forgotten that the swelling is not completely eliminated until after about 6 to 12 months.

Is there a specific time period for rhinoplasty?

No, there is no such thing. This can be done at any time of the year. It's entirely up to the patient's will.

What should I pay attention to after the operation?

Especially anything that requires a lot of effort (running, swimming, gymnastics, sex and anything that increases blood pressure) should be avoided for 2-3 weeks. The nose must be protected from blows and collisions for at least 8 weeks. In addition, no pressure (friction) should be exerted on the nose. In addition, sunbathing should also be avoided. If you wash your face and hair or apply make-up, you should do so with sensitivity.

After removing the splint, do not wear glasses for 2 months until the nose is completely restored. You can wear contact lenses.

When will I be able to work again?

At least 10-14 days should elapse. Heavy exercises can be done after 3-4 weeks.

Can nose surgery cause breathing difficulties? What to do then?

This is not to be feared after a successful operation. On the contrary, people who have problems breathing through the nose can have their problem resolved by aesthetic nose surgery and the functionality of the nose (breathing through the nose) can be restored. If there are adhesions in the mucous membrane of the nose, they can be easily removed under local anesthesia.

In addition, congenital deformities or respiratory problems caused by injuries can be corrected.

Aesthetic nose surgery can adapt your nose to your face and increase your self-esteem.

Aesthetic nose surgery should be performed after puberty.

As Master-Aesthetic and our contracted Hospitals, aim to give you the best price possible, along with a large choice of Aesthetic and Medical Surgery Centers where the most advanced technology is applied by specialized surgeons and medical teams, high quality accommodation in  luxury VIP rooms, and perfect and unique treatments.

If you want to get high technology health services at a reasonable price, Master-Aesthetic is the right place for you.